Hanger (HGR) Delisted From the NYSE; Now It's HNGR on OTC Pink

Hanger (HGR) is now HNGR because the stock has gone from being listed on the NYSE to the OTC Pink.

Hanger has been a great investment for the GDT::Portfolio, but once again I'm paying a price for being a long-term investor.

Posted by Gerald Thurman at 8:17 AM No comments:

Posted by Gerald Thurman at 1:06 PM No comments:

The embedded chart hints to me that CRAY could spike to $50+. 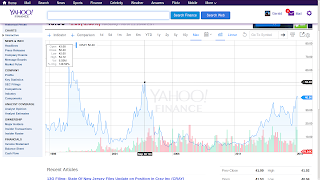 Posted by Gerald Thurman at 8:22 AM No comments:

iRobot (IRBT) press release on 02016.02.04: "iRobot Announces Sale of Defense & Security Business to Arlington Capital Partners". I'm a bit bummed with this because it seems robotic soldiers/devices is the future of war.

iRobot also announced that it will "expand its current share repurchase initiative by $65 million, including the expected proceeds from the transaction, bringing the total 2016 program to more than $100 million."

Posted by Gerald Thurman at 5:56 AM No comments:

Yahoo! (YHOO) hit a new 52-week low of $27.15 this morning (02016.02.03) after reporting 4Q'15 results. My guess is YHOO will make yet another 52-week low before the market closes today. Yahoo! announced it was going to fire a bunch of Yahoo!'s, but the workforce reduction was not considered good news by Wall Street. I'm a fan of Yahoo! CEO Marissa Mayer (she's on my computing Dream Team), but my patience for her to implement a turn around has become a decaying function of time.
Posted by Gerald Thurman at 7:10 AM No comments: